Exciting news folks!!! Queen to Ashes by Mallory McCartney is now available as an audiobook!

Read on for more details and a chance to win either your choice of a hardcover edition of Queen to Ashes, or an advanced reader’s copy of Kingdom of Iron (Black Dawn #3)! 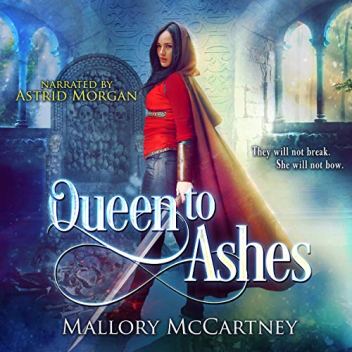 “You lived your entire life feeling like half of you was missing. Fight for the missing part. Fight for this.”

Emory Fae has abandoned everything she thought she knew about her previous life on Earth. Stepping up to her role as Queen of Kiero she makes a startling sacrifice- feigning her allegiances to Adair Stratton, the man who murdered her parents and casted Kiero into ruin. Emory’s memories slowly piece together, and she soon realizes the Mad King may not be all he seems— and the man who was once best friend, may be fighting beneath the surface.

With the King’s attention on her, can she buy Black Dawn Rebellion enough time to recuperate their forces? And when the times comes, will she be able to kill Adair, ending his tyranny and rising herself as the rightful Queen? Fighting to hide her secret, Emory navigates the brutal trials of the Mad King, trying not to lose herself in the process.

Sequel to Heir of Lies, now a bestselling series, the sparks are ignited, as Emory learns the cost of freedom, and her heritage. Will the rebels unite in time? A sinister force has spread across the land, stripping everyone bare- their betrayals, their secrets, their intentions. But above all, what will their decisions cost? By refusing to give in to the darkness, will Emory rise as Queen?

All she could hear was buzzing. Tight, unrelenting buzzing. The world dipped, and she was a ghost amongst the living.

Her mind screamed that she was going into shock as the color drained from her skin, as her limbs trembled harder. Her body betrayed her for the briefest of seconds as Adair looked at her hungrily, his dark gaze ravaging her.

The room seemed to tilt, and her mind felt thick and constricted. The bloodied sword was still in her hand, and Brokk’s body splayed out lifelessly between them: Life and Death. Love and Loss. Light and Dark. This is the divide her life had taken, and one that she was completely and utterly lost in. Suffocated in.

What had she done?

Before Emory could take another look, to convince herself that it wasn’t him—it couldn’t have been—a strong hand gripped her arm and Adair said something she didn’t register. Then, she was ushered out with the promise of tomorrow on his gaunt lips, and the burly guard led her away from the king.

The door shut, sealing away the gory scene.

Breath lodging in her throat, Emory tried to adjust to the world around her. It was numbing, her senses overloaded, the bustle of Adair’s world seeming too sharp and loud as they moved through it. Her pulse roared, and beneath the grime and blood she held on, trying not to give in to the panic tearing through her

For your chance to win your choice of either a hardcover edition of Queen to Ashes, or an advanced reader’s copy of Kingdom of Iron (Black Dawn #3), click the linl to enter!

Mallory McCartney currently lives in Sarnia, Ontario with her husband and their three dachshunds Link, Lola and Leonard. When she isn’t working on her next novel or reading, she can be found day dreaming about fantasy worlds and hiking. Other favorite pastimes involve reorganizing perpetually overflowing bookshelves and seeking out new coffee and dessert shops.

About The Far Wild

An expedition gone awry. Suni Koudounas is enamoured with the wonders — and dangers — of the Far Wild. As a naturalist’s apprentice, she’s studied every book and expedition report about the miraculous wilderness. But when her mentor goes missing on expedition, Suni sets aside the Far Wild of ink and paper to venture after him into the primordial jungle.

A missing skyship. As the empire’s most beloved adventurer — or most successful raconteur — Senesio Suleiman Nicolaou doesn’t want much. Wealth beyond measure, fame beyond reason, and a small kingdom somewhere warm should be about enough. When news of the rescue mission reaches him, Senesio knows there’s no better opportunity to add to his living legend.

The most dangerous wilderness known to man. With unexpected enemies above and monstrous predators in the jungles below, it’s up to Suni, Senesio, and their companions to uncover the truth of what’s happening in the Far Wild. It’s a revelation that will shake the empire to its core and reshape the lives of all involved — assuming, of course, they don’t all get eaten first.

Storytelling Thrives at the Intersection of Preparation and Imagination

Howdy, everyone. I’m Alex Knight — author of the recently released fantasy thriller, The Far Wild — and it’s a pleasure to be here today to talk about the writing. Or, more specifically, storytelling.

The debate on how best to write a story is endless, with numerous different camps all preaching different methods. And because writing is such an individual process, I think this is a situation where we can say everyone is right.

Whatever works for you is the best strategy to use.

That being said, I think I have an idea of something we can all use more.

I’m no household name, but I do have six books under my belt now — and a background as a ghostwriter with many more finished works. If I’ve learned one universal truth in my time writing fiction, it’s this:

Storytelling thrives at the intersection of preparation and imagination.

I think it’s best to write a story by going right down the middle.

The times I see my readers most excited are the times when they’re thinking about a plot event, or world detail, or hinted-at character backstory, and letting their minds run wild. But how do we get their minds to do this?

We create the opportunity for it. And how do we do that? We write right up to the intersection of preparation and imagination.

Plan your plot, create your character backstories, fill your fantasy world with history and living cultures. Then tell the readers just the beginnings of it all.

Obviously, for plot-necessary events, you’ll need to explain as fully as required, but for the rest, I think a less detailed touch is called for.

Lead the readers down the beginning of a rabbit hole.

“Well, because of The Event.”

Don’t explain. Just give it an intriguing name, a few small details, and set it free in the story. It’ll soon run wild in the readers’ imaginations, too. But even more than that, it’ll run wild in yours.

I like to plan my stories pretty thoroughly. But I’ve learned to leave just enough unplanned that my imagination can surprise me.

This is where the magic of writing comes into play.

Create a world, then let it grow naturally in your mind. It’ll soon surprise you and leave you wondering at all the intricacies and mysteries of it. And if it does that for you, it’ll do it for the readers, too.

These sort of jumping off points keep wonder alive in fantasy worlds, and keep us thinking about them long after the book or series is finished.

We write to tell stories, but when we leave room for imagination, we do more than tell stories, we create living, shared worlds. For ourselves, and for our readers, to enjoy for years to come.

Alex Knight is filling good books with bad jokes one sentence at a time. As an author, his work includes the fantasy thriller, The Far Wild, and the LitRPG trilogy, Nova Online. As an aspiring twin he’s not making much progress, but remains determined.

You can learn more at AuthorAlexKnight.com.