Welcome to the blog tour for Redlined: A Novel of Boston by Richard W. Wise. Read on for an excerpt and a chance to win an audiobook edition of the book!

The year is 1974. Boston’s Jamaica Plain is a neighborhood under siege, a community skating along the razor’s edge of decline. The banks have REDLINED Jamaica Plain, causing the housing market to crash, wiping out local homeowner’s lifetime investments and opening the neighborhood to blockbusters and slumlords. Now, someone has begun systematically torching those abandoned buildings and the charred body of Sandy Morgan, a dedicated young neighborhood organizer, has been found among the ashes. Why? Who stands to gain?

Community organizer and Marine combat veteran, Jedidiah Flynt and Alex Jordan, his beautiful Harvard educated researcher together with a group of local property owners are determined to stop the redlining and and bring the arsonists responsible for Sandy Morgan’s death to justice. Their search will lead them through a labyrinth of corrupt politicians, Asian gangsters and bent churchmen.

Two interwoven plots work their way through the narrative, one is absolutely true, the other never happened, but very well might have.

“Any word from the district fire chief ’s office?”

“So far can’t get anyone from the district to return my calls,” he said with a thin smile. “Better make up a Freedom of Information request, get one of your leaders to sign it. They know they have to respond to that. Talked to one of the fact checkers over at Little City Hall. She claims all fires are ‘thoroughly investigated, Mr. Flynt.’”

He raised his hands and dropped them in a gesture of helplessness.

She made a face. “Guess I better write a letter. So, what’s the point? Insurance?”

“Doesn’t seem to be a reason. Fire insurance on Green Street? Good luck getting any insurance company to write a new policy in your neighborhood or anywhere else in central J. P. The whole area is redlined.”

“Redlined? You’ve mentioned that before, but I really can’t say that I understand it all that well?”

Flynt hesitated and gazed at her for a moment to make sure that she wasn’t pulling his chain. Sandy, he knew, typically came on like she knew it all even when she didn’t.

“It’s complicated. The Northwest Community Organization in Chicago was the first people’s organization to get a handle on it. Got an organizer from N.P.A. —that’s National People’s Action—fellow by the name of Trapp coming in to run a staff training session. Basically, redlining happens when the banks or the insurance companies or all of the above get together and draw a big red circle on a map around parts of the city that they consider too risky to do business with.”

“So they write off the whole neighborhood?”

“You got it and once that happens, kiss the central neighborhood goodbye. Ninety-five percent of all residential housing sales are sold subject to a mortgage, and to get a mortgage you must have insurance. So, Catch 22, you can’t get one, you don’t get the other. If mortgage or the insurance money is choked off, the housing market collapses—which sets the stage for slumlords buying cheap for cash, racial steering and housing abandonment.”

“Redlining is the underlying economic cause of most of the shit we have been organizing around. So, basically all the properties in central J.P. are worthless?”

“Yeah, well there it is,” he said rocking back in his chair. She noted the stubble on his cheeks and the dark smudges under his smoke-gray eyes.

“You ever read the novel Gone with the Wind”? he asked.

“Well, there is this scene where Melanie is questioning Rhett Butler about how he made all his money. You recall he was a smuggler, dodging the Yankee blockade to bring supplies into southern ports during the Civil War?”

“Okay, so, Melanie finally overcomes her proper Southern manners and asks the question, and he says, ‘There is more money to be made out of the wreckage of a civilization than from the building of one.’”

Sandy rolled her eyes, “Yeah right, okay. I get it.”

“Okay, but what’s with the corridor anyhow? I mean whose bright idea was that?”

“Happened before my time. Bunch of community groups got together to stop I-95 running right through the middle of the neighborhood. Finally got the governor to stop it but not until the whole thing was demo’d in from Route 128 to Roxbury. What you see is what’s left, a partially demolished six-lane cancer eating out the guts of the neighborhood,” Flynt said.

She stood up. “Yeah, looks like Berlin after the blitz and only a couple of blocks down from my abandoned house.

Okay, I’ll get set up as soon as I leave here. But what do I do if I see anybody?”

“Stay out of sight! Hide in an alley between the buildings. Or just stay in the shadows. If you see anyone or anything suspicious, try for a description or a license plate. Then get the fuck outta there, call the cops, the fire department and then call me.”

“And if it’s late and you’re home asleep?”

“I’m serious, Morgan. Don’t take any chances. People who torch houses are not the kind of fuckers you want to screw around with. Call me if you see anything suspicious, no matter what time, day or night, just call me, okay?”

“Aye, aye, sir!” she said, and she tossed off a mock salute. 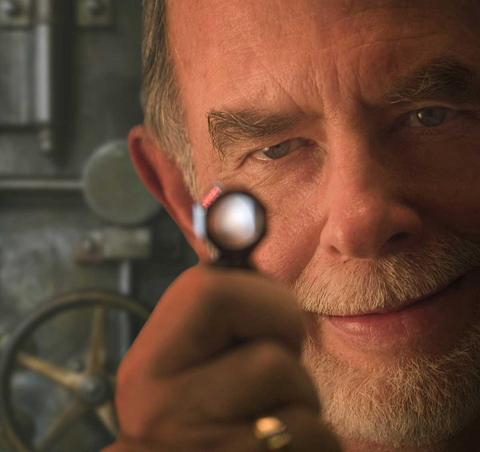 Richard Wise is the author of three books. His latest novel, REDLINED, A Novel of Boston is a mystery thriller set in Boston’s Jamaica Plain neighborhood. PublishersWeekly raves: “Fans of suspense fiction with a social conscience will be pleased.” Midwest Book Review describes REDLINED as a “An original and simply riveting novel.” REDLINED was nominated for the National Book Award and the Benjamin Franklin Award in fiction.

The author’s first book: SECRETS OF THE GEM TRADE, THE CONNOISSEUR’S GUIDE TO PRECIOUS GEMSTONES was originally published in 2001. The book was serialized in two magazines and became a critically acclaimed best seller. The second edition appeared in 2016. Extensively revised and rewritten, the 2nd edition has added 127 pages, 11 new chapters, 5 new introductory essays and 161 additional photographs.

Mr. Wise’s second book,THE FRENCH BLUE, a historical novel published in 2010 was the winner of a 2011 International Book Award in Historical Fiction. The novel is set in the 17th Century gem trade. Called “a fine piece of historical fiction” in a 5 star review by Midwest Book Review, THE FRENCH BLUE tells the back story of the Hope Diamond and the true life adventures of 17th Century gem merchant Jean-Baptiste Tavernier.

Richard Wise has enjoyed a diverse career. He is a veteran of the U. S. Coast Guard. After receiving his B.A., teaching and doing graduate work at the University of Rhode Island, he spent most of the decade of the 70s as a professional community organizer. Wise headed organizing projects in Massachusetts and Rhode island. In the late 1970s he left organizing and apprenticed as a goldsmith. He studied gemology at the Gemological Institute of American and received his Graduate Gemologist diploma in 1985. He founded his retail company R. W. Wise, Goldsmiths, Inc. in the early 1980s and began traveling internationally, buying gems and writing about them in 1986.

Mr. Wise’s articles have appeared in Gems & Gemology, Lapidary Journal, JQ and Colored Stone. He is a former Gemology Columnist for National Jeweler and Contributing Editor at Gem Market News. The author retired from retail in 2012 to pursue his writing. Currently, he writes a book review column for Gemmology Today Magazine. He lives with his wife and two cats in Charlottesville, Virginia.

We are giving away several audiobook editions of Redlined! Click the link below to try an win one!