We are so thrilled to share this gorgeous anthology with you today! The Path of Most Resistance and Other Stories comes out on October 10th and if you enjoy Black Mirror, you are going to love this! 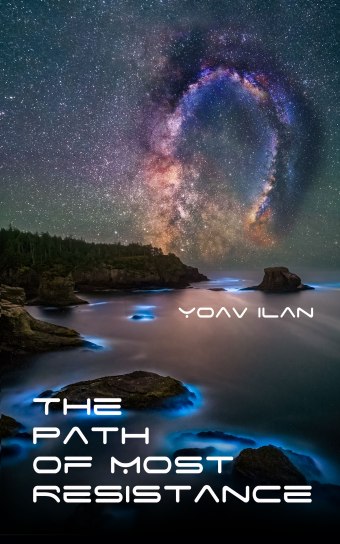 The Path of Most Resistance

The stories of The Path of Most Resistance feature curious nonconformists who find themselves pushing back against strange and oppressive social norms, mavericks who transgress the boundaries of convention in their strive for freedom and authenticity. No matter if they’re in a Silicon Valley office, the far reaches of space, or dystopian futures where relationships are subjected to totalitarian control, the characters show unshakable conviction in a world plagued with uncertainty. Each story ushers you into a unique reality that unfolds step by step, leaving you with a disturbing new perception of the world.

In “Blind Date,” two lovers chosen for each other by a hidden control system attempt to peel away the layers of their oppressive reality and peer into what they were not meant to see. In “Expressing,” a pick-up at an ordinary bar turns into a paranormal encounter. In “The Path of Most Resistance,” a hiring manager and a job candidate go all-in during an interview that will reshape their lives. In “Red Flagged,” a random passenger is accidentally exposed as a covert rebel fighting for freedom in a society that dictates what one is allowed to know. In “Miscalibrated,” an interstellar expedition runs into armed conflict with an alien civilization, in which their best chance of avoiding a nuclear war is discovering the underlying truth about the communication differences between humans and these aliens.

In story after story, author Yoav Ilan displays remarkable creativity and intelligence, showing that sci-fi can be as artistic as literary fiction, and that things are never as they seem.

They both arrived at the appointed time. He entered the hall from the south side, she from the north. Above them the ceiling soared upwards till it vanished in the darkness.

The silence in their ears was the background for the steady tap of her heels and the thud of his footsteps. The two circles as seen from above glided steadily forward along the vast floor, weaving toward the same square pillar where they stopped.

He flaunts a red flower in his buttonhole. She wears a black pin on her lapel.

All around is silence and emptiness. The two circles that were drawn around them on the floor met, forming a number 8. They remained within its bounds.

And again silence, unease. While yet trapped in the emptiness of the hall and of their conversation, the big clock struck six times. The sound and the vibrations carried through the pillar and the floor, jarring them out of their stillness.

They both wear dark glasses. If only she could look into his eyes for a brief moment. If only he could.

“A movie?” he asked. She smiled, and the 8 on the floor became a circle. “This way please.”

The elderly usher opened the door into the theater. His flashlight illuminated row upon row of seats. All but four of them were empty. A pair of seats at the far end beside the stage glowed red.

They looked alternately at each other, the voluminous theater, and at the other two couples who sat in the far corners of the sea of dusky seats. They shook their heads almost in unison, making them both burst into short, nervous laughter.

“Sorry,” they murmured to the usher as they fled outside, hand in hand.

Outside to the street, wide with long sidewalks and the odd streetlight casting its cone- shaped island of pale light. Deserted except for an old man walking his dog, crossing at a corner. On his face, dark glasses, and encircling both him and his dog, a red band that vanished with them around the corner. They noticed they were still holding hands. Shyly, they released them.

“I’d prefer to be somewhere a little less noisy, if that’s okay with you?” she says. “Something like the amusement park?”

As if in contrast to the emptiness around them, he offered her his arm and she slipped her arm through it. As they neared the entrance to the subway, they passed a policeman leaning against a streetlight. And again the same irritating thing.

Around him there is no red circle. His eyes are not hidden behind dark glasses. For his part, the policeman did not pay attention to the resentment that spontaneously appeared on their faces. The policeman indifferently checked the air around them, his eyes alighting for a moment on them and then returning to stare into empty space, as if they . . .

The pressure of her hand increased and they were dragged from there by their circles.

The amusement park was slightly more bustling than the clock tower, the movie theater, the streets. Slightly. There were about a dozen couples strolling arm in arm, bounded by circles that moved with them, dictating the direction and the pace. On everyone’s face the same dark glasses. Almost everyone. A policeman stood at the entrance to the Ferris wheel.

The couple moved toward it in a straight line, more or less. More or less because their circle swerved randomly here and there, as if dodging hidden obstacles. He bought a ticket from the automatic machine. Now, all that was left was to wait for the wheel to stop. Finally it ground to a halt, and then began to rotate again slowly, pausing momentarily as each seat reached the bottom.

“It’s absurd,” the man thought, wanting to go and sit with his partner on the vacant seat hovering at ground level, as if waiting for someone to climb aboard. But the circle around them refused to change its position.

Attempt to cross over it … the thought alone began to hurt. The outer perimeter of the circle began to glow slightly. Or perhaps it only appeared so through the tears that filled his eyes.

The thought made his head feel heavy, but this did not stop a feeling rising inside him, a feeling that had lain dormant for a long time. Perhaps the key was to act swiftly, suddenly.

All at once he broke away from the woman at his side and tried to put a foot over the boundary encircling him. Quickly, without thinking about it. If he thought about it, the Mechanism would activate the pain. 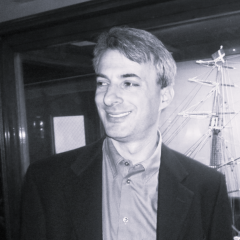 Following his career as a naval engineer Yoav moved on to Computer Science, and has spent the last two-decades in the high tech industry, ranging from small startups to big tech. He is a husband, father and a science nerd. He lives in New York.