I am so excited to share this cover with you all today! Isn’t it a beauty?! Read on for more about The Age of Resonance by Kathryn Knowles! 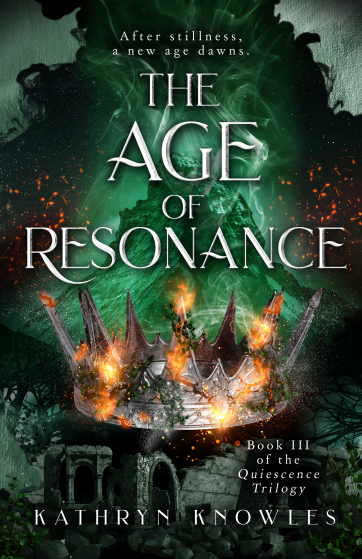 The Age of Resonance (The Quiescence Trilogy)

After stillness, a new age dawns.

A new war is brewing. The final battle between kingdoms will unearth long-kept secrets; it will challenge friendships and test communities. And Mórceá will change forever.

Catanya’s perilous and mystical journey to Túir-Avlea is over. She has arrived at the legendary mountain community where the eccentric Maílehr Laylian promises to teach her the secrets of Resonance. With the fate of the world resting on her shoulders, Catanya must learn to harness the volatile power within her, no matter the cost.

Inside Caerlon City, Diyah’s world view has been challenged. Surrounded by untrustworthy allies and perplexing enemies, her allegiances are shifting. Before long, Diyah will need to confront her deepest beliefs and choose between her own desires and her duty.

Betrayals will shape the future, and truths will be unveiled in the final installment of the Quiescence Trilogy. 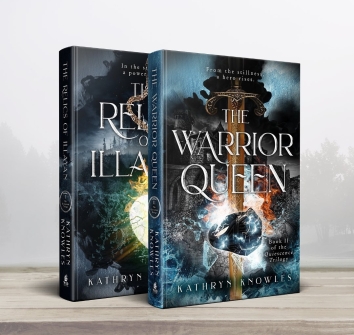 The Relics of Illayan (The Quiescence Trilogy Book 1)

In the stillness, a power wakes

Caerlon is a kingdom where the power of Resonance has long been bound to a single bloodline, a single all-powerful ruler. Now, for the first time in centuries, the magic has been divided.

On the night of the new king’s coronation, something causes his magic to fracture, and Catanya, a young woman living on the outskirts of Caerlon discovers the long-kept secret of her connection to the throne.

Driven mad by his lust for power, King Cadyan sends his soldiers to hunt her down. He is determined to reclaim his birthright and uncover the truth about the legendary Relics of Illayan, which could hold the key to eternal power and immortality.

On the run, terrified and alone, Catanya must decide how—or even if—she can wield the magic of Caerlon to protect herself and save everyone she loves.

From the stillness, a hero rises.

Catanya has escaped to the Kingdom of Awnell. Inside the towering fortress city, she meets Queen Ayr, a freethinking and cunning leader intent on safeguarding her people’s liberty. Unsure who to trust, and still grappling with her untamed magic, Catanya must learn what it means to be a warrior.

Miles away, Diyah’s strength is tested as new allies emerge and old secrets unravel. Torn between fear and curiosity, she begins to suspect that nothing is as it seems in Caerlon.

As the division between brother and sister threatens to ignite a centuries old conflict between kingdoms, both Catanya and Diyah must decide what price they are willing to pay for freedom.

New dangers approach and mysterious legends emerge in the second installment of the Quiescence Trilogy.

Kathryn Knowles is a composer, cellist, conductor, and writer currently based in Toronto, Ontario. She splits her time between writing, teaching, conducting, composing, and running Mad Endeavour.

In her spare time, Kathryn enjoys taking on new creative projects (i.e. filling up that “spare” time), spending time with friends and family, tending her ever-growing plant collection (obsession), and looking at pictures of puppies and dreaming of the day she can have one of her own.