I’m thrilled to share this brand new Dystopian Thriller, Born in Salt by T.C. Weber with you all today! Read on for more details and a chance to win a digital copy of the book, in your format of choice!

Fifty years after a coup replaced President Franklin D. Roosevelt with a fascist dictatorship, America is a land of hopelessness. Ben Adamson, a 19-year-old farm boy in southern Illinois, wants only to spend his time fishing and hunting. But when his dead brother demands justice for his suspicious fate in a colonial war, Ben and Rachel, his brother’s fiancée, are drawn into an underground revolutionary movement.

After staging a rally against the war, Ben and Rachel are arrested by the Internal Security Service, who have perfected the science of breaking people. Ben is given a choice: betray the rebels, including his best friend from childhood, or Rachel will be lobotomized.

Although traumatized and addicted to a powerful drug, Ben refuses to doom anyone he cares about. Can he find a third option? Can he free Rachel and strike back at the dictatorship, while dodging the suspicions of police and rebels alike?

The New Bethany Town Square was a small grassy space in front of the county courthouse. Main Street split into two here, running to either side of the square and the courthouse before recombining. To the south of the square, it ran past most of the stores. To the north, it passed the city and county police stations, then a stretch of newer buildings and houses.

The year after I was born, 1965, was the twentieth anniversary of retaking the Philippines from the Japanese, forcing them into an armistice. Every town got a statue. In New Bethany, the government erected a marble Marine in the middle of the town square, rifle held high in triumph. It wasn’t an ideal spot to call for an end to war, but it was the only public space in town.

Rachel lived only a few blocks from the square, but I insisted on picking her up. The police would have seen the flyers by now, and might want to arrest her before we even started.

I was late again. Rachel stood on her front porch, wearing her funeral dress and tapping a foot. She carried a paper shopping bag in one hand, and scowled at me.

“Sorry I’m late.” At Rachel’s insistence, I’d put on my suit, and it took me forever to get the damn tie right. “Are you sure you want to do this? Talking to people one on one is a lot safer.”

Her face tightened even more. “It’s a little late to back out now. Besides, God blesses the righteous and Jake will be with us.”

I led Rachel to the truck and opened the passenger door for her. “Let’s get it over with, then.”

I parked on Lincoln Street, just off Main, and we hopped out into chilly gloom. Dark clouds gathered in the west, threatening rain. I focused on the task—swung down the tailgate and pulled out the mike and amp I’d borrowed from Jesse, the band’s bassist. He’d kill me if they got wet.

The amp had a power inverter so you could run it off a car battery. Together they weighed at least a hundred pounds, so I’d strapped them to a stand-up dolly. No mike stand, but I had enough to carry as it was. I handed Rachel the black microphone case and cables and she slipped them in her bag.

A couple dozen people were in the square, wearing coats over Sunday suits or dresses, the women’s hats sprouting feathers of near-extinct birds. I recognized Alyce and maybe half the others.

Rachel’s face fell. “I was expecting a lot more.”

“Or they don’t care. The weather is fine.” She straightened. “We’re early. More will come.”

My stomach seized. Figures squatted or lay on rooftops around the square, pointing guns and cameras.

Atop the three-story law office building, a suited man held a long-lensed camera. Next to him, a man in black body armor braced a high-powered rifle on a tripod while another peered through binoculars. Opposite the courthouse, on the First Consolidated Bank roof, more of the same. On the east side of the square, city police aimed guns out the second-floor windows of the column-fronted City Hall.

The courthouse itself had a peaked roof. After the coup, the government had added a wooden bell tower on top, from which, I supposed, you could see the whole town. Beneath the purely decorative bell, half hidden by white columns, a dark-suited man stared at us through binoculars. A sheriff’s deputy pointed a rifle with a fancy scope.

The clock on the bottom of the tower read 12:18. We had twelve minutes to prep or escape.

“Do you see the snipers?” I whispered to Rachel.

“Yes.” Her voice quivered. “But we’re not doing anything wrong. They’re just trying to intimidate us.”

She was probably right. They wouldn’t actually shoot us. Or would they? We were easy targets, standing still in the open. They could take their time and go for a head shot.

Past the bank, I spotted Paul standing outside the New Bethany Diner, sipping soda or something from a jumbo-sized paper cup. No sign of the others. Not surprising, since the group hadn’t approved our rally. And it was better Sarah wasn’t here—that would just add to my worries.

Rachel hugged Alyce and other people she recognized, then reached in her bag and pulled out my brother’s portrait, the one that had been propped on his casket at the funeral. She leaned it against the base of the soldier statue.

Behind the picture glass, Jake smiled at me. I plugged the mike into the amp and clipped the amp to the car battery. I flipped a switch and the power light turned green. I tapped the mike, and the speaker thumped.

I wanted to hurry this up and waved Rachel over. I handed her the mike. “You’re on.” The battery would last at least an hour, but I doubted we would have that long.

New Bethany’s gray-haired police chief paced back and forth, carrying a megaphone. The Internal Security troops stared at us, long batons and compact submachine guns fastened to their belts.

My knees shook. “Rachel, I’ve got a bad feeling. Really bad. We should go, right now.” 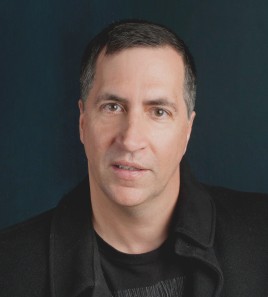 Ted Weber has pursued writing since childhood, and learned filmmaking and screenwriting in college, along with a little bit of physics. Trapped at home during the “Snowmageddon” of 2010, he transformed those interests into novel writing. His first published novel, a near-future cyberpunk thriller titled Sleep State Interrupt, was a finalist for the 2017 Compton Crook award for best first science fiction, fantasy, or horror novel. The two sequels, The Wrath of Leviathan and Zero-Day Rising, are also available. His latest release, Born in Salt, pits an Illinois farm boy against a ruthless fascist government that took power in a coup. Mr. Weber is a member of Poets & Writers and the Maryland Writers Association, and has run numerous writing workshops. By day, Mr. Weber works as an ecologist, and has had a number of scientific papers and book chapters published. He lives in Annapolis, Maryland with his wife Karen. He enjoys traveling and has visited all seven continents.

International Giveaway: Click the link below for a chance to win a digital copy of the book!
a Rafflecopter giveaway