Nothing will ever be the same. Satina is gone, kidnapped by the enemy. Disobeying Lucifer, Philip heads out to find her, journeying into the deep darkness of Outer Reach. But nothing can prepare Philip for the horror that awaits—or the demons he will face.

Meanwhile, Lucifer’s kingdom is threatened as the Great Devil War draws closer. All Hell is about to break loose.

The Angel of Evil is volume 4 of The Great Devil War series. 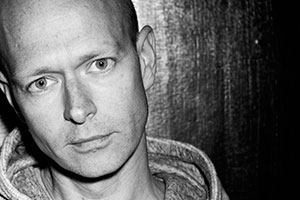 … and I began writing when I was a teenager. My first book was a really awful horror novel titled Nidhug’s Slaves. It didn’t get published. Luckily.

During the next 7 years, I wrote nearly 20 novels–all of which were rejected–while working as a school teacher. The rest of the time I spent writing.

In 2000 I published my debut fantasy book, The Battle of Caïssa, and that’s when things really took off. Since then I’ve published more than thirty-five books for children and young adults in genres ranging from fantasy to horror and science fiction.

My books have been translated into more than 15 languages and my series about the superhero Antboy has been adapted for film, which is available on Netflix. An animated tv series is currently in development.

A musical of The Devil’s Apprentice opened in the fall 2018 and the movie rights for the series have also been optioned.

I live in Copenhagen with my wife, two boys, a dog named Milo and spiders in the basement.

The Great Devil War was published in Denmark from 2005-2016, beginning with The Devil’s Apprentice.

Even though the story (mostly) takes place in Hell and deals with themes like evil, death and free will, it is also a humoristic tale about good and evil seen from a different perspective. A tale that hopefully will make the reader – young or old, boy or girl – laugh and think.

Welcome to the other side!

The War Against God

He is back in Paradise, surrounded by its splendor. The dew drips from the leaves and treetops, shining like pearls in the light from a sun that seems brighter than ever. A cool morning mist drifts between the trees. The forest is quiet, although it is filled with animals. They carefully sniff their way around on shaky legs. Silent. Curious. Newborn. They are only a day old.

In front of Philip, standing in a little meadow, is God. His gray cape is spotted with mud. He observes the figure before him. A human being. No, not a human being. A sculpture. A man molded from dirt and water. His eyes are closed. He isn’t alive.

Jehovah reaches out and smoothes the man’s cheeks, presses the eyes a little closer together, makes the nose a little smaller. Then he nods and smiles. He leans toward his creation and blows softly on his face. Seconds pass. Then the man’s chest begins to rise and sink as he slowly starts to breathe, and then the eyes slide open.

“Adam,” Jehovah says, not noticing the figure standing nearby, watching, hidden within the dark of the forest. It’s merely a shadow among shadows and in the sky a single cloud drifts over the deep blue sea and…

… he stands in front of the Tree of Knowledge. In front of the juicy red apples, which offer the wisdom of good and evil, and which one day will lead to the fall of man.

He isn’t alone. There’s someone standing next to him and Philip gasps when he sees who it is.

But he can hardly recognize him. The half-long dark hair frames a vibrant and glowing face. It looks so different without the horns. The eyes that one day will be blacker than an abyss are a fierce dark blue. His swan-wings peek out from under the white cape. It is Lucifer. But it’s Lucifer the archangel, not yet the Devil.

He’s holding an apple. He’s plucked it from the Tree of Knowledge and the second he takes the first bite, a voice calls out to him from within the forest.

An angel walks out of the forest. He’s younger—much younger—than last time Philip saw him. It’s the angel who brought him to his father’s house. Michael.

Lucifer tosses the apple and turns around. He doesn’t smile. “I was lost in thought.”

“Come on. It’s time. Jehovah’s latest creations are ready and we have to—”

The smile on Michael’s lips droops slightly. “No? What you do mean, no?”

The smile is gone, the forehead furrows. “But Jehovah has ordered it. You can’t just dismiss it. Man was created and we’re going to celebrate…”

“Celebrate?” Lucifer takes a step toward Michael. He suddenly appears threatening and his eyes… They appear a shade darker. “Celebrate? How? By humiliating us, ridiculing us, and making a mockery of us!”

“Watch your mouth!” Michael warns, and now his own voice turns hard. “Why would you say something like that? Man is an exceptional being, created in Jehovah’s own image, out of—”

“Out of dust and mud!” Lucifer yells, incensed. “A simple creature! Inferior! Lowly! I’m supposed to bow to him? Never! We were first. If anyone’s going down on bended knee, it’s him! That creature should be worshiping us!”

“If you don’t do what the Lord commands… He’ll get mad.”

“Then it’s his anger against mine. Let’s see who wins.”

“What are you talking about?” Michael shakes his head in disbelief. “What’s going on with you? Where is all this darkness coming from?”

“What’s going on with you, Michael?” he hisses back. “Why do you put up with it?”

The snow-white wings unfold, sparkling like sword-blades in the sunshine, and in the flash of an eye, Lucifer is gone. The half-eaten apple is still lying on the ground and…

… everything is darkness. Philip can’t see a thing. He can only hear a velvety voice, talking in a whisper. Lucifer’s voice. Bewitching. Seductive. Tempting. He’s still an angel, but his voice is the voice of the snake. It’s inescapable, engulfing Philip in the darkness that fostered it.

“Throw ourselves on the ground for a man?” it asks. “Are we nothing but slaves?”

“Mankind is an inferior being,” it says. “It is not to be worshiped. It is he who should worship us.”

“Mockery!” it says. “Degradation! Humiliation! How could Jehovah stoop this low?”

To win a digital copy of this book, enter the giveaway here.