So a little back story for you. My secondary school did one school trip a year (seriously) and in year 8 we were supposed to go to Stratford on Avon (home of the Bard) but because of what my head master called ‘a lunatic fringe’ our trip was cancelled.

I have two degrees in English Literature and am a massive word nerd/lit geek.

Seven years ago I met the Mr – his last name is Shakespeare. He’s very loosely related to William Shakespeare.

Anyway onto this weekend.

Last night I was told to pack an overnight bag and hop in the car. I had no idea where we were going. I only found out this morning because of his clever plan. We spent the night in a Premier Inn near Birmingham. Yep, the most famous playwright was a Midlands boy.

Parking the car next to Stratford Hospital we set off on foot to explore Tudor houses, beautiful gardens, a high street full of puns and navigate around several huge tour groups.

At the top end of the street is a statue of The Fool, welcoming you to Shakespeare’s town.

A little further down is the centre run by the Shakespeare Birthplace Trust, which includes the preserved buildings that belonged to Shakespeare’s parents, Anne and John. It has been turned into a museum, complete with interactive areas in the glovers’ workshop (John Shakespeare was a tanner and glover as well as an Alderman, Council member and general person of note in the community).

It would have been nicer without the very shouty lady in Tudor costume upstairs by the master bedroom.

The grounds were stunning, a lovely garden that is clearly well tended, and certainly enjoyable in the summer sunshine. There’s a gift shop, obviously, where you can buy all sorts of related merchandise.

We also wandered down to Shakespeare’s daughter’s house, where she lived with her husband. Again, it is beautifully presented and contains a cafe and actors performing scenes in the garden.

Lunch was a huge Ploughman’s in a rather excellent cafe just down from the Birth Place.

We didn’t go to Anne Hathaway’s cottage but did drive past, or Mary Arden’s farm as it was a bit out of the way but did enjoy strolling around the lovely market town and admiring all the preserved Tudor half-timbered houses and pretty church.

We also visited the MAD Museum (which I decided to review seperately).

I wanted to see New Place, recently excavated, which Shakespeare bought after becoming successful, but unfortunately the opening has been delayed due to heavy rainfall flooding the site. 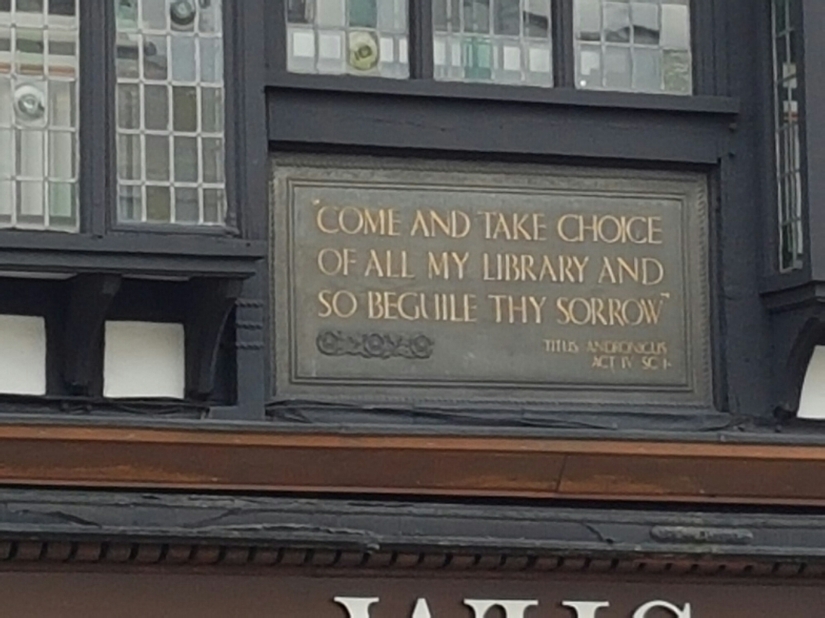 We had a bit of fun spotting various references to Shakespeare and his works all over Stratford, some in the strangest of places (see photos) and the town also hosts a year round Christmas shop, a Beatrix Potter shop, a magic shop, teddy bear factory, and lots of cafes.

Oh, and one other thing happened. 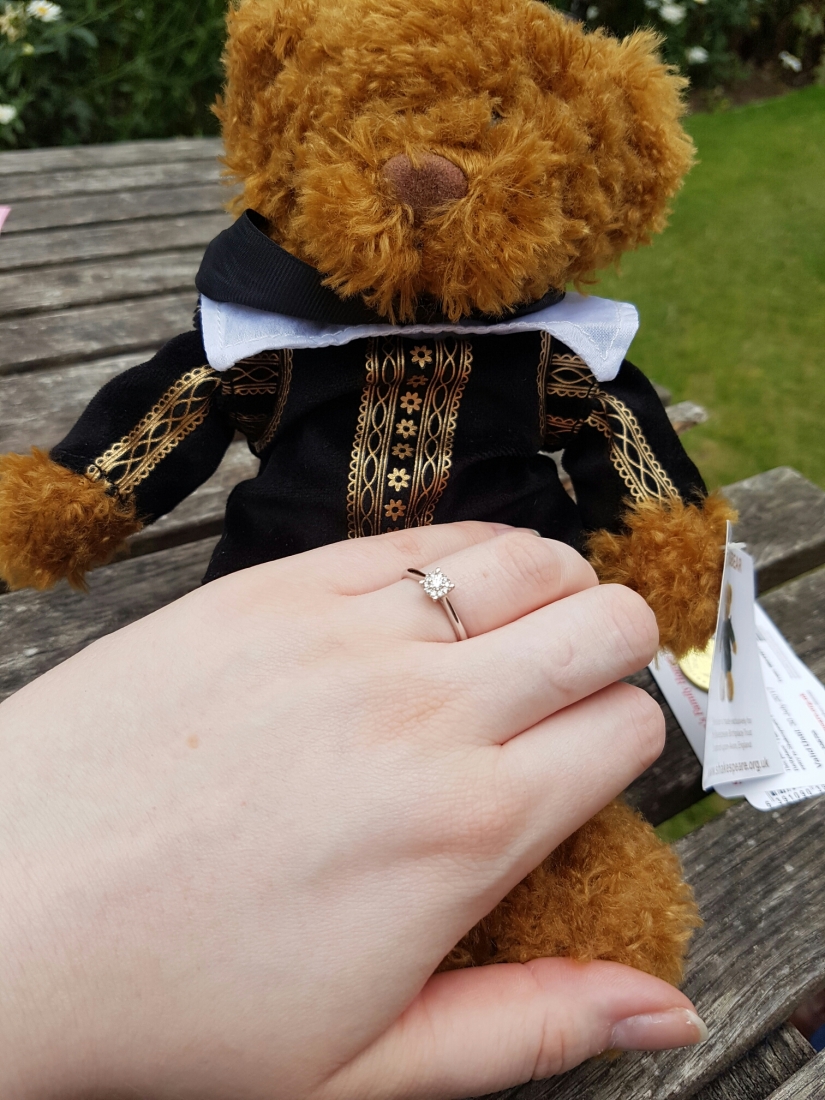 With a little help from Shakesbear here, the Mr asked me to marry him. We’ve been driving each other crackers for 7 years now and in the beautiful garden at Shakespeare’s childhood home, his distant relation (there are no direct descendants) asked me to be his.

He’s not very romantic or soppy (thank goodness) so this was rather special. We’ll be celebrating with family and friends soon but I will need all your advice please as I plan a wedding.

1 thought on “Stratford on Avon ”